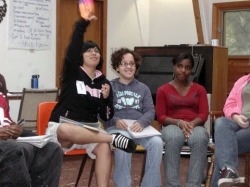 Experience the growth and development of music throughout history. The Almost Perfect Fifth, a random selection of musicians from New England, examines music history through the unique lens of a brass quintet. The concert will include Mozart, Brahms, Joplin, Mendelssohn, and others.

Bring your potluck dish at 5:30…or, come early and take a dip in the pond or a walk in the woods! The concert will be first, starting shortly after 5:30, followed by dinner. Donations will be accepted towards the funding of the concert.

Come celebrate the fall harvest with the Voluntown Peace Trust. We’ll be harvesting in the morning and then throwing it all into the cauldron in the evening for a taste extravaganzaa. Bring a side dish or dessert and a musical instrument if you have one.

Join David Anderson Hooker and the Voluntown Peace Trust to delve deeper into the process of group facilitation. Through shared experience, hands-on training, and interactive exercises, this workshop will deepen our understanding of group facilitation and offer tools and resources to empower us as facilitators.

Partner Mary Novak and Activist-in-Residence Patty Adams will be traveling to the US Social Forum (USSF). The USSF will provide space to build relationships, learn from each other's experiences, share our analysis of the problems our communities face, and bring renewed insight and inspiration. It will help develop leadership and develop consciousness, vision, and strategy needed to realize another world.

VPT is organizing and facilitating two sessions at the Social Forum.

June 28:
Pillars of War/Sectors of Struggle: Strategic Nonviolence in the Anti-war Movement and Beyond

An analysis of the Iraq war from the Iraqi perspective, and a look at where the Anti-war movement is four years into the war. Plus, looking at the pillars that sustain war and empire as well as how the immigrants rights and labor movement connect to and are affected by war. Includes steps for identifying the tools, skills and resources needed to advance movements for social change. Cross-movement building and social analysis are central to this session.

Using one tool for social movement analysis, Bill Moyer's Eight Stages of a Successful Social movement, to map where different movements are including the anti-war, transgender rights, immigrants rights, worker rights, and anti-militarism movements. Cross-movement building and social analysis are central to this session.

Join us for the next community potluck, which will include a presentation and discussion about the work of the Nonviolent Peaceforce and unarmed civilian peacekeeping missions. VPT's Patty Adams recently returned from an intensive month-long training in Ecuador (the civilian equivalent of "boot camp"), which makes her trained and eligible to be deployed by the Nonviolent Peaceforce to serve on a multinational field team in a conflict region. Come learn about the work of nonviolent peacebuildling--a real alternative to war--throughout the world and explore how this work can connect to local efforts in our own communities. Dinner at 6pm, Presentation and discussion at 7pm.

Throughout spring and summer we will be working on rebuilding one of the deteriorating cabins outside the Ahimsa Lodge, using the green technique of cordwood building. Come lend a hand and contribute to the earth’s and VPT’s sustainability. Please contact us if you are interested in helping out. April 20-23 Camp Little Windows.

April 12, 2007 Globalizing from Below: Grassroots Organizing for Social Change

At Connecticut College, from 4-6:30 pm. Join Swedish activist and peace researcher Stellan Vinthagen in an exploration of grassroots organizing and ways to connect our local struggles to global struggles for justice. Co-sponsored by Voluntown Peace Trust, War Resisters League and CCLeft.

VPT closes its Winter Film & Discussion Series and inaugurates Community Pot-luck Nights with this film which invites us to explore our relationship with the land. The film follows renowned sculptor Andy Goldsworthy as he creates with ice, driftwood, bracken, leaves, stone, dirt, and snow in open fields, beaches, rivers, creeks, and forests. With each new creation, he carefully studies the energetic flow and transitory nature of his work. The pot-luck starts at 6pm and the film starts at 7pm.

Spring begins in the warmth of the green house here at VPT. We will be starting seedlings for our emerging Community Supported Agriculture project under the direction of gardener Mary Hill. Please contact us if you would like to participate.

AN INCONVENIENT TRUTH, offers a passionate and inspirational look at one man's fervent crusade to halt global warming's deadly progress in its tracks by exposing the myths and misconceptions that surround it. That man is former Vice President Al Gore, who, in the wake of defeat in the 2000 election, re-set the course of his life to focus on a last-ditch, all-out effort to help save the planet from irrevocable change. In this eye-opening and poignant portrait of Gore and his "traveling global warming show," Gore also proves himself to be one of the most misunderstood characters in modern American public life. Here he is seen as never before in the media - funny, engaging, open and downright on fire about getting the surprisingly stirring truth about what he calls our "planetary emergency" out to ordinary citizens before it's too late.

By Alan Snitow and Deborah Kaufman

Is water part of a shared "commons", a human right for all people? Or is it a commodity to be bought, sold and traded in a global marketplace? Thirst tells the stories of communities in Bolivia, India and the United States that are asking these fundamental questions, as water becomes the most valuable global resource of the 21st century.