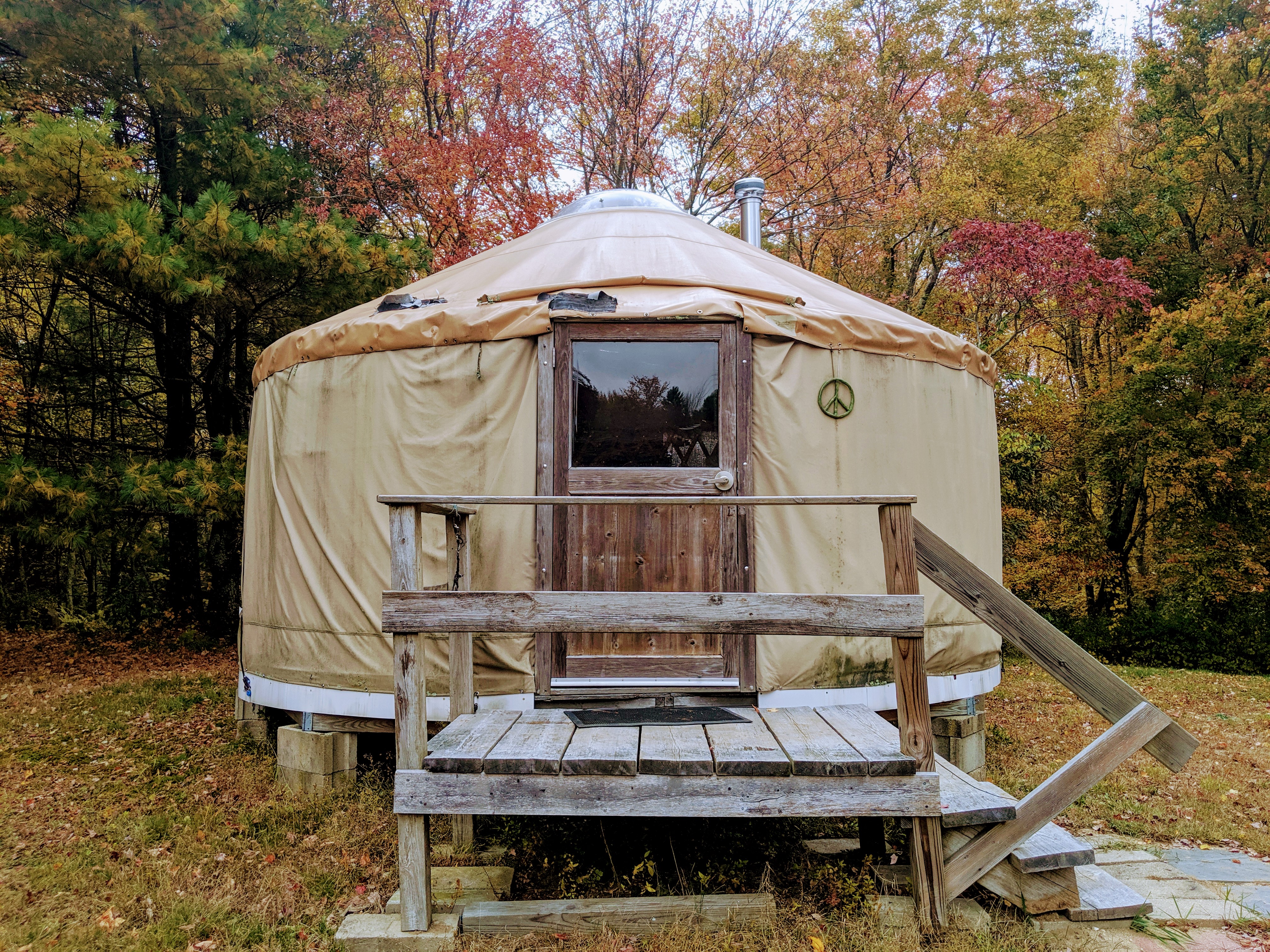 ​This 16 feet in diameter yurt is available as a sleeping space for up to four or a break-out room for conferences. Inside is a futon, pull-out couch, and space heater. We provide a mattress cover, blanket, and pillows. Please bring your own bedding (or sleeping bag) and towels or rent them for charge of $10 per bed. The bathroom with a shower is steps away in the conference center. Picnic tables on a covered porch are available for your use. It is also the perfect space for a small family or for a personal retreat.

Standing a couple feet off the ground, the design of this structure is inspired by the traditional dwellings of nomadic peoples of the Eurasian Steppe. The concept of yurts was first imported to the West in the 1960s-1970s, and they have been adapted to the change in environment and in purpose. The Yurt at the Voluntown Peace Trust was gifted to us by the Johnson family, who built an insulated wooden floor made of 6 wedges for mobility into the structure. They also installed additional insulation along the walls.

Occasionally there may be other people using the conference center for programs or work. There are two bathrooms in the center. A campfire circle is available. Guests must obtain instructions from the VPT caretaker before wood is collected or a fire started.
​
Inside the yurt is a small refrigerator, microwave, toaster oven, coffeemaker, and dishes/glasses/eating utensils. 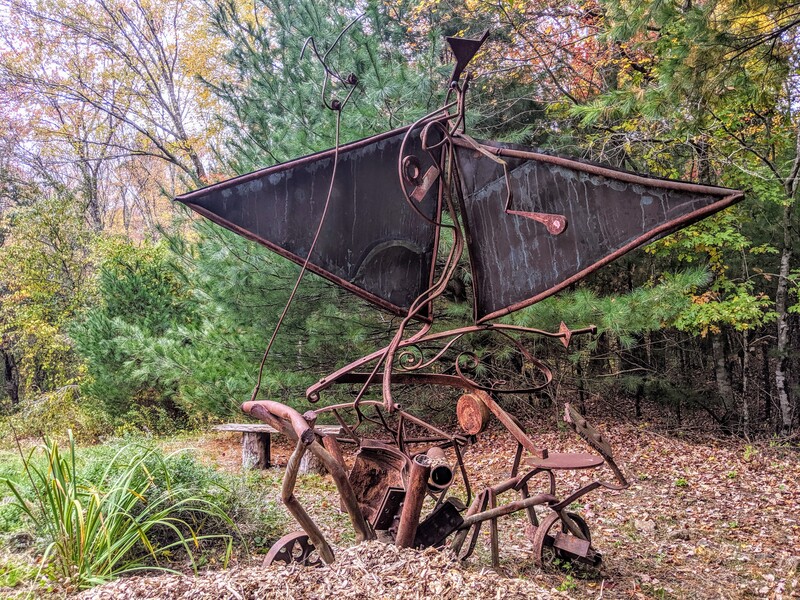 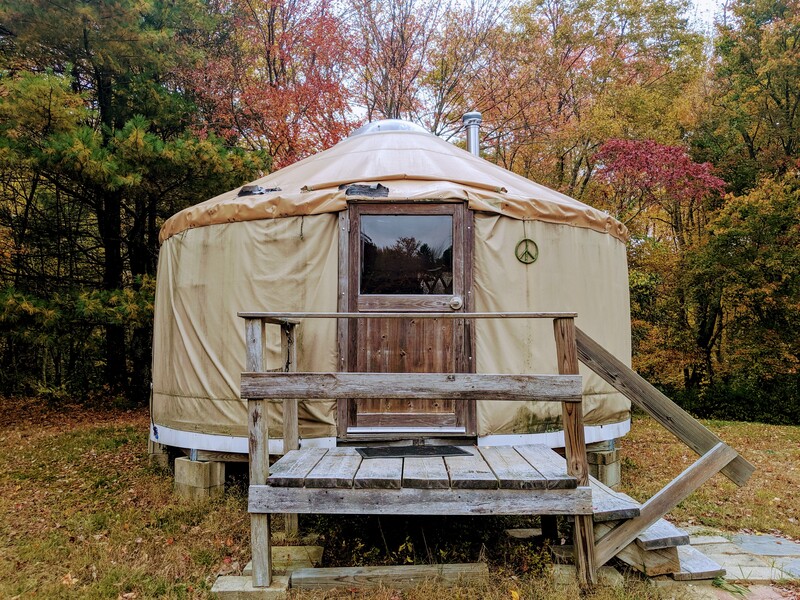 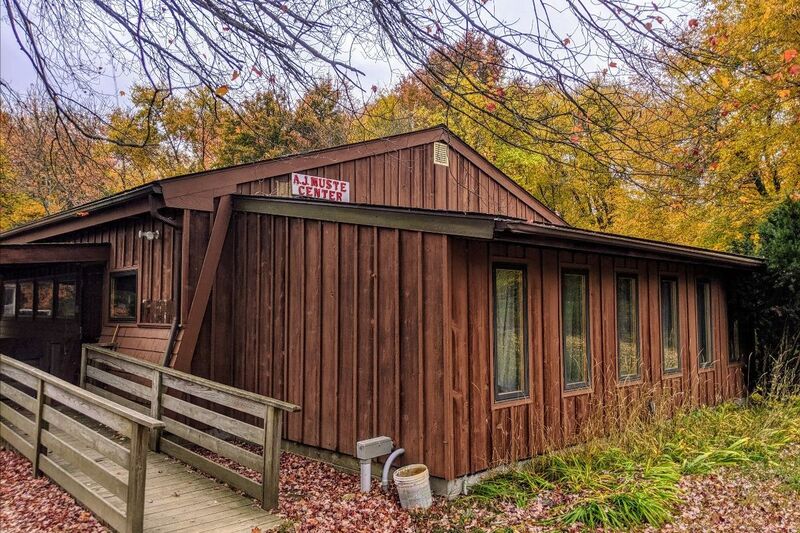 This yurt was donated to VPT by Jane and Kit Johnson, long time members of the Voluntown Peace Trust community, who had it in their backyard in Stonington. Here are reflections of their son Ben who lived in the yurt:

I spent several years living in the yurt as its only resident. As someone staying in there by myself, I found it to be an incredibly calming place to be. Unlike a house, it wasn't totally disconnected from the elements. When it rained--the top of the yurt was like a giant drum. When the train went by a mile away, you heard it. When the peeper frogs were out...when the buoys in the sound gave their slow, lonely honk. When a breeze would pass through or a bumble bee would buzz by. When you are in the yurt, you are in something that amplifies its own environment. There's something very powerful about that.

But you're still much more protected than just a camping tent, as long as you're willing to be the yurt's steward. I spent many nights there in temperatures near Zero....in snow storms and in the sweaty summer. The yurt is versatile. You can batten hatches, or you can open them up. You can crack the skylight to let the heat seep or keep everything air tight. IN the dead of winter, I would start the fire in the wood stove at 2 p.m. and stoke it all day until it was full of coals and the yurt was full of warm air. If the night was really cold and the fire got weak, I would wake, hat on, long johns and all with just my nose and mouth sticking out from under a mountain of blankets. And I would have to creep out of bed to stuff more logs in and poke at it. Sure, my house was just a quick jog away...but it felt like survival. I was a wise hermit; a peaceful warrior on a solitary mission; a simple mountain man. But really just a boy with his own space.

While the Yurt is a great place to be alone, it's an even better place to be with other people. The most significant and immediately palpable characteristic is its roundness. In the Western world, a round space is an unusual space, and that's a shame, because a round space is a much more natural place for people to be. We start out in a round space. The Yurt focuses conversation and gives it depth; it makes people remember that everyone should have a chance to give their own thoughts. It is a great equalizer; no-one gets to be at the head of the table. At the pulpit.

If you are staying in the yurt, you should remember that much more than a house it is like our own spirits. You have to take an active role in caring for it, and in caring for yourself in it. There will always be something to do--a log to put on the fire; a bug to shoo back outside; a window to close or open. But in doing those small things you will find great comfort, quiet, peace, great oneness with the world and with yourself.

Ben Johnson
Visit our main Rentals page for general information about our rental policy.
Or, call (860) 376-9970 and/or email us with any questions or if you wish to book a stay with us.