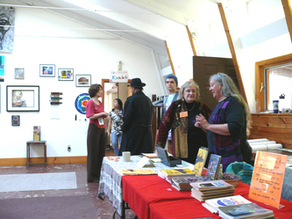 Inspired by the peace calendar “Sparking Change”, this event was organized by the War Resisters League New England to support the Voluntown Peace Trust.

See Pictures of the Show here. 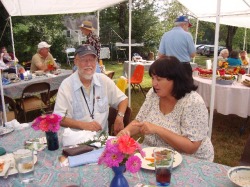 We are thrilled to report that our 1st annual VPT Garden Gala fundraiser on August 30th was a ginormous success! The food was beyond delectable, the silent auction fun and profitable, and the music was just-right mood-enhancing. Even the weather was fine!

We surpassed our goal to raise a good amount of seed money for next year's garden. But most of all, we enjoyed the greeting and meeting of so many good, down-to-earth folks. Thank you all for supporting this endeavor. What a joy to be able to do so much good and have so much fun!

Thanks to Karen Colberg and Nancy MacBride for taking such beautiful pictures of the day.

For a selection of recipes from the menu, click here! 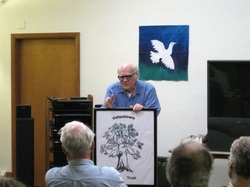 A STORY OF "TURNING" What does it mean to be transformed?  What events transform the life of a political leader, a president?  In his new book from Orbis, James Douglass traces the "turning" of President John F. Kennedy from the Bay of Pigs and the Cuban Missile Crisis right to the week of his death in Dallas as he is transformed from a conventional Cold Warrior to someone determined to pull the world back from the edge of apocalypse.

Douglass views Kennedy's change from a contemplative perspective, particularly attuned to the grave moral and spiritual issues at stake.  President Kennedy, as it turns out, saw his mission in similar terms.  Those who plotted his death were determined to kill the vision.  Only by unmasking these forces of "The Unspeakable," Douglass argues, can we free ourselves and our country to pursue that vision of peace.

Jim Douglass has written four books on the theory and practice of nonviolence, served as a theological advisor on nuclear war and conscientious objection to the Second Vatican Council, and taught at Bellarmine College, the University of Hawaii, and the University of Notre Dame.  He and his wife Shelley founded the Ground Zero Center for Nonviolent Action near Seattle, and Jim served a year and a half in jail for acts of civil resistance at the Trident Submarine Base.  He has made numerous peacemaking journeys to the Middle East, and five visits to Iraq.  In 1993, Jim and Shelley Douglass founded a Catholic Worker house of hospitality in Birmingham, Alabama, for homeless families.

Click here to buy JFK and the Unspeakable from Amazon.

Iraqi artist Amal Alwan Al-Maseer and peace activist ChristopherAllen-Doucot give a presentation on the war in Iraq followed by a showing and sale of Amal's oil paintings.

Amal, which means "Hope" in Arabic, is a mother, artist and refugee. Amal was displaced by the bombing of Baghdad in 2004 and spent years seeking safety in Syria and Jordan before arriving in New Paltz,New York, earlier this year.

Chris first met Amal in 1999 during one of his many trips to Iraq with the antiwar group Voices in the Wilderness. Chris has given presentations on the situation in Iraq at many universities,churches and at an international conference in Moscow. 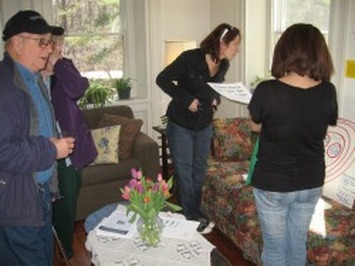 When artist Nancy MacBride offered to host an art show to raise funds for the Voluntown Peace Trust (VPT), she wasn’t sure how local residents would respond. Undaunted, she contacted artists from around New England and New York to ask whether they would donate a percentage of their sales in return for a gallery spot, to help maintain VPT’s historic property and advance its mission of social change and sustainable living. The artists replied with a resounding “yes!” Encouraged, Nancy solicited the support of a few dedicated committee members to scrub walls, make refreshments, and spruce up the organization’s farmhouse in anticipation of the March 28th event.

Artists arrived that Saturday to find VPT’s Campbell House transformed into a gathering spot, showcasing their work. The scent of wholesome, home baked treats filled the air, and wine bottles sparkled invitingly from our rustic kitchen table. Nancy’s crew of artists and volunteers waited on tenterhooks. Within minutes of the opening, local residents and supporters began to trickle in. Soon, the “gallery” hummed with conversation, laughter, and lilting tunes played by musicians Matt Pirie and Kit Johnson. Aune Jalkanen, a longtime Voluntown resident, took time off from admiring the artwork to share sepia photographs of the property, as it was when she lived there in the 1940s. First selectman, Gil Grimm, welcomed newcomers to his town and mingled with the locals. Visitors also took time to learn more about the farm’s history – such as the role it played as a stop on the Underground Railroad.

In all, 26 pieces of art sold, raising $1,082.00 for the Peace Trust. Responding to a question of whether the show will be an annual event, Nancy chuckles... “Ask me next year!” she says.

A tremendous THANK YOU to Nancy, all of our artists, Matt Pirie and Kit Johnson for providing music, the volunteers who scrubbed, cooked, and hung art, and all of YOU who viewed and purchased the beautiful artwork to make the day a success. We couldn’t have done it without you!

For a picture gallery of the day and sample images of the artists’ work, click HERE.

Finally, a big thank you to Marc Frucht, milwaukeeindymedia, who provided this YouTube video of the day: