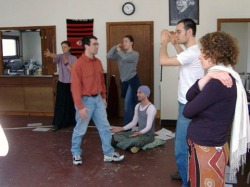 November 10, 2006   VPT Fundraiser
Join us as we heat up an Autumn night with music, dancing, and hearty hors d’oeuvres at the Pond House in Hartford’s Elizabeth Park. Festivities begin at 6:30 p.m. Tickets: $50.

October 14, 2006   VPT’s Garden Coop Harvest Cauldron Party
Celebrate the Fall Harvest with VPT. Please bring vegetables or other edible items to add to the cauldron. Remember that it is not a party without music, so please bring instruments and your singing voice to create music with us. Children are encouraged to attend. Festivities begin at 4:00 p.m.

October 9, 2006   Ghandi’s Constructive Program
Gandhi outlined three elements for social transformation and saw them as intertwined. Social change, according to Gandhi, will not come about by just doing one of them. The three elements are: personal transformation, political action and constructive program. MP Mathai is Professor and Director, School of Gandhian Thought and Development Studies, Mahatma Gandhi University, in Kerela, India. At 7:30 p.m. at the A.J. Muste Center on the VPT property, Dr. Mathai will present on Gandhi’s constructive program after which will be an opportunity for dialogue and questions. Donations for Dr. Mathai will be accepted.

September 23, 2006   Benefit Dinner for VPT and Hartford City Mission
Shane Claiborne, founding partner of The Simple Way community in Philadelphia and author of Irresistable Revolution will be the featured speaker for this benefit dinner. You are invited to join us at Scout Hall Youth Center, 28 Abbe Rd., East Windsor at 6:00 p.m. Seating for the event is limited so tickets should be purchased in advance from Hartford City Mission or Hartford Catholic Worker. Suggested donation is $15.00.

September 20, 2006   Pilgrimage of Peace Dinner and Conversation
A group of pilgrims – people of faith from Christian, Jewish, Muslim, Unitarian Universalists and other traditions – are walking around Connecticut to announce the good news of peace between September 10 and 24, 2006. They will make stops every day along a route that goes from New London to New Haven to Hartford to Norwich and back to New London to sing and talk with people about genuine peace in the world. The Pilgrimage will conclude on the weekend when Jews celebrate Rosh Hashanah and Muslims begin the Ramadan fast. It is also during the week in which people around the world will be signing a “Declaration of Peace,” and calling on governments to end war. The pilgrims will be walking through Voluntown on September 20 and will rest for the night at the Voluntown Peace Trust. You are invited to join them for dinner and conversation at 6:00 p.m. Please RSVP and bring some food to share.

June 24-25, 2006    VPT Friends & Volunteers Weekend
VPT’s viability is possible only because of generous & amazing friends and volunteers.  Our friends and volunteers are invited to come spend the weekend at VPT to celebrate the beginning of the summer and the past few years together.  We will also offer a ritual celebration honoring the life of Fred Pfeil.

May 27-29, 2006            Youth Theatre for Social Change Workshop
This introductory workshop is open to youth between the ages of 15 and 20 who are interested in theatre as a medium for developing social change strategies.  Facilitators Amy Marsico and Michael Shank will expose the participants to a wide variety of arts-based approaches, including Forum Theatre, Street Theatre, and Playback Theatre in order to gain skills for effecting constructive change in their communities.

May 21, 2006           Ched Meyers - A Theology of Sustainability
Ched Myers is a theologian committed to popular theological education and social analysis with faith-based activists.  He will be joining us for a time of liturgy, meal sharing and bible study reflecting on the Prophets as Defenders of Creation.

April 22, 2006     “Down on the Farm” Workday
Come celebrate Earth Day here at VPT:  Plant something in the garden, prepare the trails for summer use, build a composting toilet and more.  Food and fun is definitely on the agenda.

April 7-9, 2006             Arts for Trauma Awareness and Resilience
Educators, caregivers, social workers, community leaders and others who would like to gain a deeper understanding of trauma will benefit from this weekend workshop.  Retreat Facilitators Odelya Gertel and Jeff From will guide participants through engaging ways of using the arts as a medium for developing skills and tools for trauma resiliency.  Sliding scale: up to $150, based on ability to pay; scholarships are available.

March 31-April 2, 2006          Activist Retreat
Following the global days of action (March 18-20) responding to the 3rd anniversary of the U.S. invasion of Iraq, activists will gather to rest, reflect, learn and strategically analyze the actions.  Retreat Facilitator Cybele Locke, Ph.D. will guide this exploration.  Suggested contribution: $25.00, but no one will be turned away based on ability to pay.

March 10-11, 2006   Dreams: Source of Healing and Wholeness
Based on Judeo-Christian tradition and Jungian psychology, this retreat/workshop will explore dreams as a source of inter wisdom and wholeness for the individual and for the world. Participants will experience practical means of working with their dreams. Led by Retreat Director Carmela Garofalo, RMS. Suggested contribution is $100.